Galaxy S6 vs. iPhone 6: Which will be your new favorite smartphone? 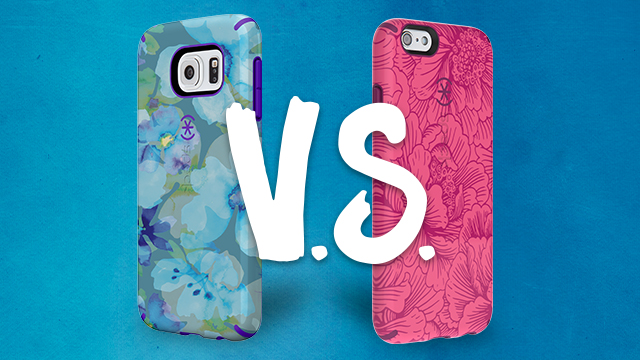 We can’t help but be obsessed with the new design of Samsung’s Galaxy S6 and Galaxy S6 edge. We bet that you’re just like us – trying to decide which phone is the perfect fit. Let’s see them side by side…

SEE THEM IN ACTION

First off, don’t miss this crazy cool side-by-side comparison by The Verge, who make it as easy as moving your cursor back and forth across images of iPhone 6 and Galaxy S6 to see the main aesthetic differences between the two.

For one, both phones have all-around metal builds, with front and back glass (though the Galaxy S6 is armed with tougher-than-anything Gorilla Glass). The Galaxy S6 comes in just slightly thinner than the iPhone 6 at 6.8mm versus Apple’s 6.9mm. Of course, one of the most noticeable differences is the new fingerprint scanner that Samsung has mounted on their new flagship… A nod towards Apple’s iPhone 5s & all designs moving forward?

The new Galaxy S6 has stepped up their storage to match the iPhone 6, now boasting a 128GB capacity, which Apple has already had for a while now. Apple’s A8 processor pairs with 1GB of RAM, with Samsung’s Exynos processor that delivers 3GB of RAM… But the experts at PC Advisor say that this may not mean the Galaxy S6 is a clear winner, since “these two phones run very different software.”

See what kind of Galaxy S6 cases and iPhone 6 cases we’ve got in store to protect whichever device you choose. Rest assured, you’ll be arming your smartphone with mighty slim, military-grade protective protection.