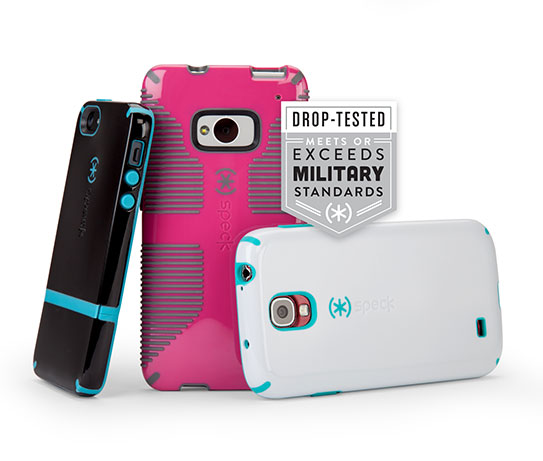 The MIL-STD-810G U.S. Military Standard used to test the Speck protective CandyShell cases involves a series of hard-surface drops from multiple heights at varying angles. In order to pass, the CandyShell case preserved the phone’s full functionality with no damage to the screen or buttons. In independent laboratory testing, the CandyShell case met or exceeded each requirement, thoroughly defending iPhone 5, Samsung Galaxy S4 and a wide range of today’s most popular smartphones.

“The results show that military-grade protection does not necessarily mean adding excess bulk to the thickness of the case,” said Bryan Hynecek, vice president of design at Speck. “The CandyShell design is the result of over five years of refinement to craft a slim case that is highly protective, so people love the way it looks and feels.”

Speck refined their design and manufacturing processes to create a unique hard/soft case providing multi-impact protection. CandyShell’s hard outer shell guards against impact and has a glossy finish for a sleek, stylish look. Its soft inner layer absorbs shock and features a raised bezel to protect the screen and covers to shield buttons.

Numerous customers have written in to share their stories of Speck cases saving their gadgets during accidents and in extreme conditions. To find out about a paraglider in Draper, Utah whose CandyShell case protected his iPhone 5 from a 2,000-foot drop and to check out more stories, visit /blog/your-stories.

About Speck
Speck is a leader in creating sleek and stylish cases with patented protection that celebrate the joy of innovation and self-expression. Since 2001, our eclectic team of inventors and color-lovers has been designing all of Speck’s products in-house. Speck’s award-winning cases provide military-grade protection, slim-fitting designs and useful features so you can get more enjoyment from your handsets, tablets and MacBooks. To learn more about Speck, visit www.speckproducts.com or follow us on Twitter, Facebook, Instagram and Pinterest.

* As the above material makes clear, Speck has tested a number of its cases and determined that the identified cases meet or exceed certain standards often used by the military to determine effectiveness of protection. To be clear, this does not mean that your devices will never break. If you drop them hard enough, or from high enough, or at just the wrong angle, your device may still be damaged. And if you happen to drop your device into a river of molten lava, Speck case or no Speck case, let it go. Cause it’s gone.