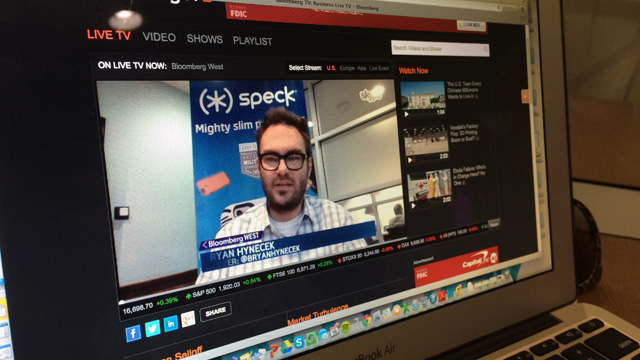 Yesterday Bloomberg took a look at the Apple event and how iPads have evolved over the years in an interview with our very own Vice President of Design, Bryan Hynecek, who helped create the #1 bestselling tablet case*, the StyleFolio from Speck.

Of course Bryan spoke to Apple’s devices continually getting thinner while packing in more impressive specs and features. In yesterday’s iPad Air 2 and iPad mini 3 announcement, Apple showed how two of the new iPad Air 2 stacked on top of each other are still thinner than the original iPad, earning the new tagline “Change is in the air.” Bryan commented on this innovation during his interview:

“Apple is smarter than anybody trying to figure out what the market really needs and what the market’s really responding to.  They do a great job experimenting with different sizes of devices to accommodate different types of people.”

Not only is the new iPad Air 2 slimmed down, but it’s been sped up as well. Macworld applauds the new A8X chip for boosting the graphics on the new iPad up to 40%. Aside from the upgraded chip, Forbes says the new Touch ID is the second-biggest feature on the new iPad Air 2, especially because of its compatibility with Apple Pay. Needless to say, we’re excited to get our hands on one.

Sign up to be notified as soon as our iPad Air 2 and iPad mini 3 cases are available.