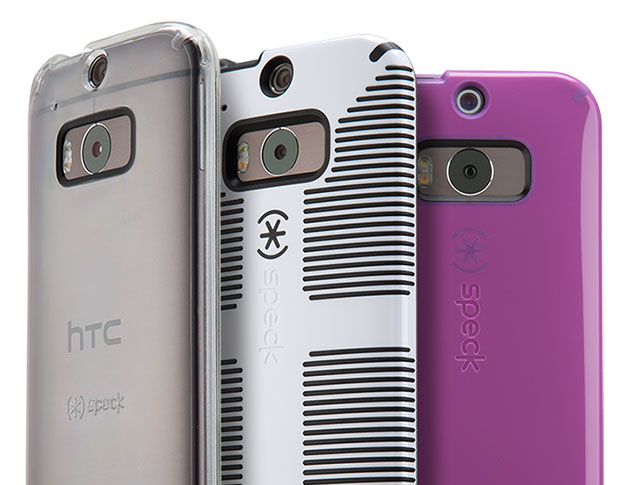 Mountain View, Calif. – March 25, 2014 – Speck, the leading designer of award-winning, mighty slim protective cases and covers for smartphones, tablets and laptops, announced its lineup for the new HTC One® (M8), which was revealed earlier today.

Speck is releasing three of its most popular case designs, expertly engineered specifically for the new HTC One (M8). Each case combines style with mighty slim protection in a sleek case. Additionally, our standard anti-glare ring around the camera, which is included on all Speck CandyShell designs, works especially well with the device’s new duo camera and its powerful flash.

“We’re excited by the response we’ve had to the HTC One (M8) from partners like Speck,” said David Kou, executive director of global accessories. “Accessories are such a personal choice for consumers and Speck has some great case options for this premium device.”

CandyShell and CandyShell Grip cases will be available in black, white, and an exciting new shade of purple based on 2014’s Pantone color of the year. You can find Speck’s take on this year’s highest trending and most popular color, Beaming Orchid, on some of our newest cases this Spring on speckproducts.com.

And we’re obsessed with creating a more perfect union between humans and machines. That’s why we design award-winning, proven-protective cases for mobile devices, including smartphones, tablets and MacBooks that are bold, not bulky. That’s why we insist on designing every case in-house and lab testing our products down to the details, often against rigorous military-grade standards. And that’s why we hold patents on functional innovations that enhance the relationship between you and your devices—all without sacrificing protection or style. Since 2001, Speck has created cases with sleek lines, radiant colors, and military-grade protection that make your devices live longer: LONG LIVE THE MACHINES™. Get to know us at speckproducts.com or follow us on Twitter, Facebook, Instagram, and Pinterest.