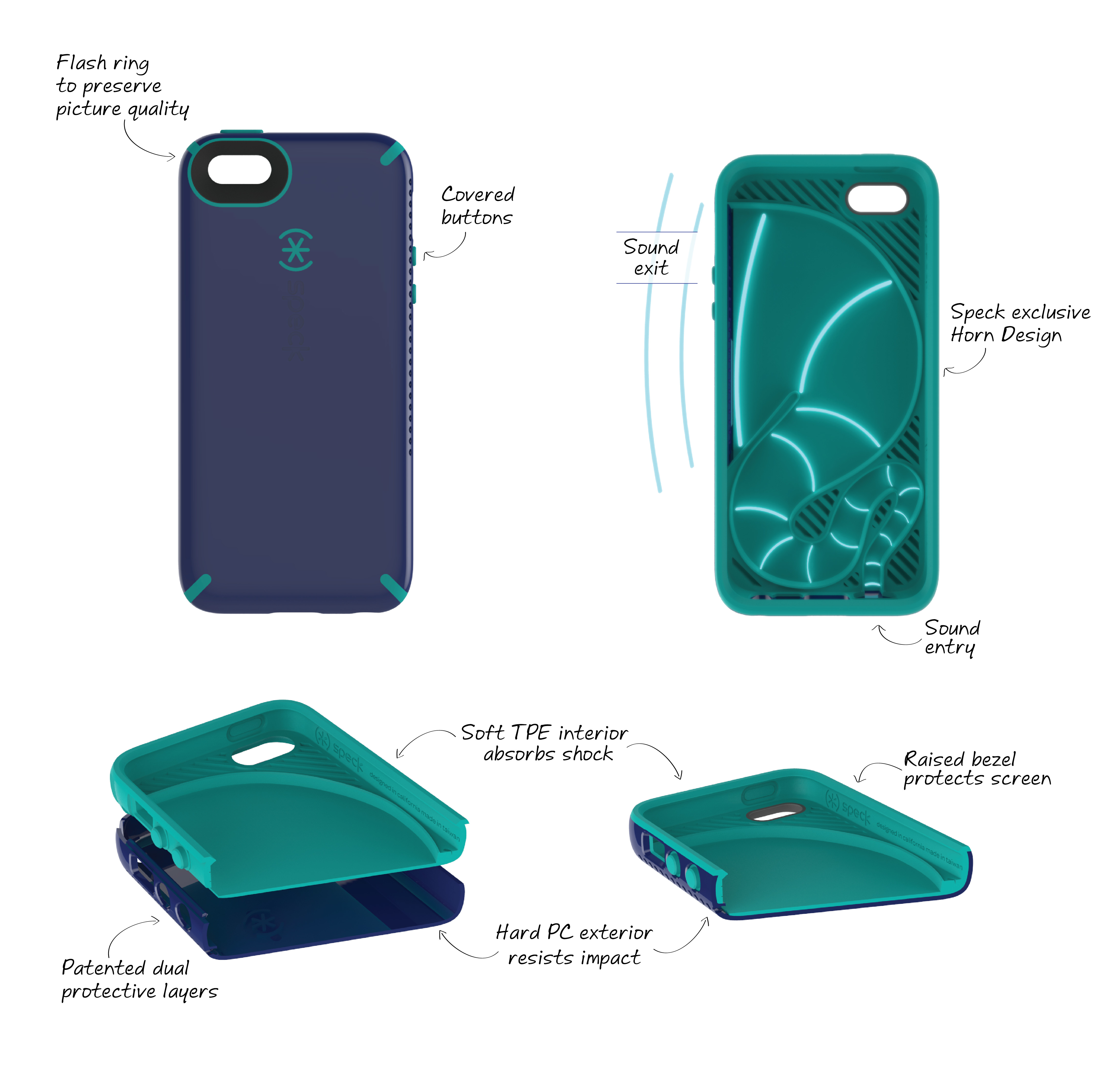 Let Speck answer all of your questions about our latest in innovation: CandyShell Amped, the sound amplification case for over 2x louder& clearer sound.

A: We teamed up with FISH Innovation to create an acoustic channel that reroutes the sound from your phone’s speaker through a horn shape. This horn design, exclusive to Speck, naturally amplifies your phone’s sound and outputs it from a speaker grill that follows the length of your phone, on the button side. That way, you can have clearer and over 2x louder sound instantly– without waiting for a charge.

Q: How does it work without requiring batteries?

A: The horn design acoustically amplifies in the same way that a gramophone does. These are often called ‘acoustic transformers’, meaning that they move sound through a small-to-large shape that transforms the audio we hear from a small-to-large sound.

Q: How was the independent testing carried out?

A: The output of an iPhone 5, with and without a Candyshell Amped, was measured in an anechoic chamber at 20 different positions.  This was carried out in accordance with the international standard ISO 3745.

Q: What is the science behind CandyShell Amped being 2x louder?

A: Because loudness is subjective, there is no exact measurement to quantify this as an experience. However, we are able to measure sound pressure, which is presented in decibels (dB).

Research indicates that 2x loudness is equivalent to an increase in sound pressure of between 6 and 10dB(A).  The independent testing of CandyShell Amped measured a 9.6 dB(A) increase across 6 octaves.

Q: So why do some things sound louder than others?

A: CandyShell Amped does not amplify all frequencies equally.  It has the greatest effect in the mid-range, so it will sound loudest when listening to the human voice, either sung or spoken.

A: Similar to the loudness, the greatest improvement in clarity will be noticed when listening to the human voice, either sung or spoken.  This is because speech intelligibility is determined by our appreciation of consonants, which all feature in the mid-range.  As we know this is where CandyShell Amped has the greatest impact.

A.  CandyShell Amped only amplifies the sound from the loudspeaker, not the earpiece.  Therefore it does not affect the loudness of the phone when used in the conventional manner.

Q: What are the dimensions of CandyShell Amped?

A: The horn cavity adds only 3mm (or 0.12”) to the depth of CandyShell Amped, making its total dimensions:

While its weight totals just 1.24 oz.

A: Yes, CandyShell Amped is protected by patents and patents pending in the United States and/or internationally, including 8,204,561 and PCT/IB2013/059347.

Q: What does military-grade protection mean?

A: This product meets or exceeds MIL-STD-810G standards. CandyShell Amped was drop tested onto a hard, unrelenting surface at multiple heights with the phone retaining full functionality and no damage to its screen or buttons.

To be clear, this does not mean that your devices will never break. If you drop them hard enough, or from high enough, or just at the wrong angle, your device may still be damaged. And if you happen to drop your device into a river of molten lava, Speck case or no Speck case, let it go. ‘Cause it’s gone.